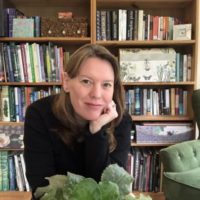 A popular motif around the Pacific Northwest is the lush greenery you see almost wherever you go. It’s no surprise that Washington natives are fond over our own greenery. But could you imagine if our plants, flowers, or trees could act in other mysterious ways?

We’d like to thank one of our patients, Karen Hugg (posted with permission), for challenging our imagination and creativity with her fascinating horticulture novels. Unbeknownst to us, our patient is a published author writing fictional tales about plants.

A little bit about Karen. She is a mother, a wife. She has worked previously as an editor in small print companies and even in cooperate America even expanding international borders to help launch up Amazon.fr. Despite her astounding resume, there was still something tugging at her creative soul. She found beauty in plants and pursued horticulture, later creating her own small gardening business. Throughout her journey, she wrote articles about gardening in her spare time that inspired her to become a novelist. Continue below to get a preview of her recent work, The Forgetting Flower.

Secrets and half-truths. These litter Renia Baranczka’s past, but the city of Paris has offered an escape and the refuge of a dream job. The specialty plant shop buzzes with activity and has brought her to a new friend, Alain. His presence buffers the guilt that keeps her up at night, dwelling on the endless replays of what happened to her sister.

All too suddenly, the City of Light seems more sinister when Alain turns up dead. His demise threatens every secret Renia holds dear, including the rare plant hidden in the shop’s tiny nook. It emits a special fragrance that can erase a person’s memory—and perhaps much more than that.

As Renia races to figure out the extent of the plant’s powers, she’s confronted by figures from her past who offer a proposal she can’t outright refuse. Bit by bit, she descends into a menacing underworld of blackmarket mobsters, navigating threats and fending off abuse to protect the safe peaceful life she’s worked so hard for. Desperate to outwit her enemies, Renia maneuvers carefully, knowing one wrong move will destroy not only the plant, but the lives of her sister and herself.

Learn more about Karen Hugg and her novel at https://karenhugg.com/

Looking for something in particular?

Search our articles for the answers you need!